One thing different when solving a 4x4 Rubik's cube is that after you have reduced it to a 3x3, you might get a parity error. This is when a single dedge ("double edge") is flipped around the wrong way. This can never happen on a 3x3, but it can on a 4x4.

(The other parity error is when two edges need swapping, but that algorithm is quite easy. Just r2 U2 r2 (Uu)2 r2 u2, which is easy to memorize.)

I used to keep in on my phone and pull it out whenever I needed it. But now I have found an algorithm that is much easier to memorize that will solve the parity error. It is this:

Seriously. That's it. Just turn half the cube one quarter turn, and your cube's dedge parity error is now fixed!

Unfortunately, the cube is now obviously very unsolved, so you have to fix the centers and dedges again. But once that's done, you won't have the parity error anymore. Yay!

If only there was a way to detect if your cube has a parity error before you solve it too much. There is. I will attempt to explain it. Using the following method, you will be able to detect if the 4x4 cube is in a state of parity error or not, long before the end of the solving process. In fact, it works as soon as the middles and edges are solved. So as soon as the 4x4 resembles a 3x3, you can use this method to detect if you have a parity error and thus need to employ the (rR) move. If you use the (rR) move at that point in solving the cube, it is a lot easier to recover from it.

How to detect if a 4x4 cube has a parity error long before it is solved.

How to count "good edges".

I hold the cube with the white face facing me and the red on top. I hold it with my thumb on the orange (bottom) and my middle finger on top (red), so I can rotate it around. I count the four dedges around the white face, turn the cube around and then count the four edges on the yellow. Then I turn to the right, the blue face, and count the two dedges yet uncounted (the one on top and the one on the bottom). Then I turn the cube around, to the green face, and count the last two dedges uncounted (the one above and the one below).

When I say "count", I don't mean simply count, because I would reach the number 12 every time. I mean "consider" if the edge is good or not. I count the number of good edges. If I reach an odd number, the cube has a parity error.

A good edge is one that meets either one of these two criteria:

So completely ignore the top and bottom, the red and orange. 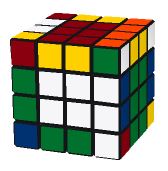 Start on the white face, looking for edges around the white center that have the white or yellow facing you. There are two. Then you look at the other sides of those four edges, looking for green or blue. In the above picture you can see the white-blue edge on the right. This would count as a good edge because there is blue on the side, but we have already counted it because of the white on the front. It only counts as one, not two. The other two dedges, the green ones, aren't showing the colour on the other sides. If they were green or blue they would count as good edges. (but they can't be because they have green on this side). So this white face, the first one, gives us two good edges. 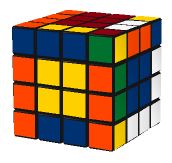 Then turn the cube around to show the yellow face. Count the edges that are showing white or yellow facing you. There are none. Then count the edges that have blue or green on the other side of the edge. There is one, the orange-green, which brings our count to three. I happen to know that other orange dedge is a orange-blue, even though it is not shown here, so that brings our total count to four. 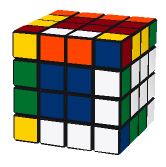 Then turn to the right to examine the blue face. Count the number of edges that have blue or green facing you, but only look at the one on the top (orange-white), and the one on the bottom (white-red, but you can't see the red). There are none. Then count the number of edges that have white or yellow on the other side, but only look at those same two edges. Yes, the orange-white is a "good" edge, bringing the total to five. The other white-red block has red on the bottom, not white or yellow, so it doesn't count. 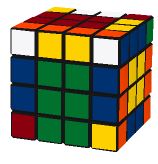 Then turn to the last face, the green one. Count the number of edges that have blue or green facing you, but only look at the one on the top (yellow-orange), and the one on the bottom (green-?). There is one, bringing our total to six. Then count the number of edges that have white or yellow on the other side, but only look at those same two edges. The green-red at the bottom doesn't matter, since we have already counted it. The edge on top has orange on top, so that doesn't count.

So the total number of good edges is six, which is even, so that means this cube can be solved without having a parity error. If it would have been odd, I would have done the (rR) move to fix the parity error, resolved the centers and dedges, and then finished solving the cube as usual.